So I think I need to work on my drawing. Getting back into this art stuff is going well but there are things I used to be able to do easily which are more difficult now. In the past I cold rough out what I want to paint and simply work it to a good point. I now believe this was due to the fact that I drew alot too, so painting became an extension of drawing in a way. Since I've done neither in so long I can't simply rely on my skills as a draftsman anymore- I need to get those chops back. Though I will still paint, my plan is to concentrate on drawing for a while.
My style always relied on large areas of rich, dark colors. Now that I am working with a single object or a few, I need to be sure I don't copy Jim Dine (or even Donald Sultan) too much. Again, I'm little less worried about content at this point but still... 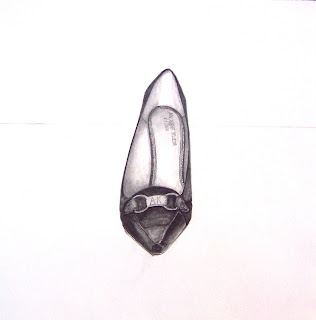 I'm pretty happy with this shoe- it is a study for a painting I will complete soon. I'm messing around with stuff in the studio like the corkscrew and the cork drawing. With the cork drawing, I am going back to the old style. Still not sure where I'm going to land 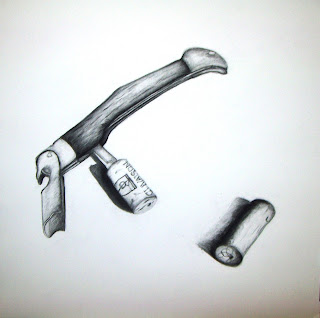 Posted by Stephen Boocks at 5:07 PM No comments:

I had a pretty intense week at work trying to get everything in order to take next week off. I will have to take a couple of hours to run some reports on Tuesday, but other than that my attention is all on my family and making art. So Friday we tasted through about 20 Zinfandels in less than two hours- this is work so we do spit the wine- it is tasting and all of us drive home so drinking is not a good option. There were plenty of good ones- nothing really sucked (excepted a corked Mendo ZIn but that doesn't count). There were quite a few nice finds at the 8-12 dollar range. We also tasted a sample of a new Dogfish Head project- a really nicely balanced IPA at about 9% ABV.

Anyway- getting the reason for the post, Lori and I had a nice dinner (I grilled Rock Fish for her and a Ribeye for me). We drank two Titus wines with them- The Reserve Chardonnay and the Amphora Red Blend. Both were very, very good and with recent price drops due to the economy, relatively good values. I am a big fan of the Titus wines. I've hung out a couple times with Eric Titus who runs most of the family operation and his brother Phillip is simply one of the best winemakers working in California right now. I'm kinda bummed that another wine he makes, the Chappellet Signature Cabernet just got 94 points from Wine Spectator (last year's Pritchard Hill scored 96). I say bummed because I usually buy a few bottles of this wine each year and I'm afraid it is going to sell out quickly now. With the Disney trip this week, I didn't want to plop down the money for the wines right now. Let's hope I'm worrying too much about this and the wine will hang around a while. That said- you should get some.
Posted by Stephen Boocks at 5:09 PM No comments:

Meet the Artist Night at Artomatic

So the truffles went over well, probably better than the art. Their chocolaty deliciousness got people to hang around a bit. I had some really good comments but, as usual, Heather stole the show. She was working her shift on the fourth floor but telling everyone to come down and try the truffles- it worked! We met Conner, the 12 year old artist- seems like a good kid.

I also reconnected with someone I knew from the 80's when I was at the Corcoran, painter Matthew Langley. I was a little embarrassed since my work being shown is simply ok, but it seems he went through the same sort of trajectory as I did- Stopped painting shortly after art school, found a way to makes some money (day job) and then began to work painting back into his life. It was encouraging. I'm already much happier with my latest work. I'm giving myself a year to see, if I can get back to a high level of work I was at before.

Right now there are two struggles- getting my chops back and what I should paint. I'm working on the first issue and simply painting whatever for the time being. I'm researching and planning out some future work- going back to TS Eliot- this time I'm working with the Four Quartets. I'm hoping that by the time I'm firing on all cylinders I will also have arrived at some subject matter that will make for compelling work.
Posted by Stephen Boocks at 6:36 AM No comments:

Dang- I just don't know how people keep up with this blogging stuff. Anyway- I'm making truffles tonight for tomorrow's Meet the Artists night at Artomatic. I stopped by Whole Foods to get the finest ingredients. I'll post later with chocolate on my fingers.
Posted by Stephen Boocks at 2:32 PM No comments: