A post on Matt Langley's blog made me start thinking again about critical theory and its relation to postmodernism and other art world isms that have come about since theory forced itself on an equal plane with artistic creation. Like Matt, I found the group associated with October to stimulate ways of thinking about art production and, on a higher level, its purposes in the contemporary world. The book "Art After Modernism" which was edited by Brian Wallis was my bible in art school with Hal Foster, Craig Owens and the other October editors being as influential as the Euro scene to me. I recently repurchased the Anti-Aesthetic (ed. Hal Foster) to read on an extended business trip and found myself thinking deeper about all levels of art from production to presentation and, ultimately critical scrutiny. I'm starting to dig into Hal Foster's book "The Return of the Real" which was published when I was not engaged in the art world enough to know of it. I received it as a Christmas gift from Lori who stated that she hopes she is never forced to read it. Now, Lori is one of the best painters I know and is intellectually superior to just about anyone I have ever met. It is telling that critical theory holds no real place in her practice. Does it really matter? 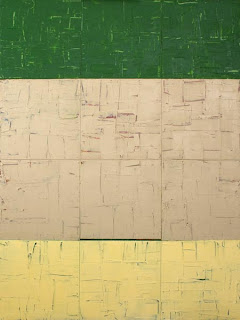 I often joke that I only learned three tangible things in art school and only one had anything to do with technique. Back in 1984-85, when I was a foundations student at the Corcoran, I learned two of these three things. Franklin White taught me what a powerful tool the eraser can be. In response to my use of crappy, cheap acrylic colors and student grade canvas, Marie Ringwald told me to use the best materials I can afford. She showed me slides of some pieces that used glass bricks and neon (if my memory is correct). Over the long run, that statement has always stuck with me as much as a pink pearl and dry cleaning bag. I've come to understand that statement to mean, know why you are using what you are using to make your work. Does the material support the work or does it get in the way? In art, as in most things, it all comes down to balance. Do all elements work in concert with each other to create a seamless whole. I am looking to find work for Material World that finds that balance.

Marie Ringwald 2010
Posted by Stephen Boocks at 5:32 PM No comments: