I've been working a lot on some new pieces and I'm pretty happy so far. But I thought I'd catch up with some beer and wine thoughts.

First beer- thanks to Artomatic for turning me on the Flying Dog's Amber Lager. I really haven't been a huge fan of Flying Dog in the past. First, I'm not a fan of Ralph Steadman and the beers seemed a little uninspired to me. Well, they seem fresher now and this may be due to the fact that they are brewed just up the road in Fredrick, MD. This is said to be in a California Common style (think Anchor Steam) but to me it is simply a well made amber brew with nice malty aromas and flavors and a super smooth finish. It is like an amped-up Yuengling. It is my session beer for now. I still keep some Yuengling cans around in case I decide to make some beer can chicken.

The other night, I opened a Central Coast Syrah called Domain Alfred Califa. It was rich with layered dark fruits and subtle baking spices and a touch of earthiness. I rated it 92 points (Wine Enthusiast had rated it 93) but Lori thought it was too minerally. Thought the price has been dropped considerably, I will pass on purchasing any more for the cellar. There are plenty of wines we both like, such as the Sonoma Loeb Cabernet 2005 which seemed to be gone as soon as it was opened.
Posted by Stephen Boocks at 7:37 PM No comments:

I'm pretty excited. I've been wanting to clean up the studio, making it more workable. I was waiting to get the lights we purchased for Artomatic back to get enough light in there to really see what is going on since I work mostly at night. Well, after a few snags with finding solid wood to drill into I finally got the lights up. I moved some shelves around and moved some crap to some other locations and now I think we have a good working environment. The drawing table is to left now providing an entire wall for working. The room is about 11' x 14' but I haven't measured it so I could be wrong. Being a basement the ceilings are a little lower causing the lights to make the room look (as Lori likes to say) "like an alien surgery theater."
I typically paint against the wall and Lori likes to work on the ground, so division of space is fairly easy right now. She's so prolific, I'll probably be relegated to a small corner. Seriously, we'll probably need to expand the operation to the garage- this will require a little weather proofing but it seems pretty nice out there most of the time. 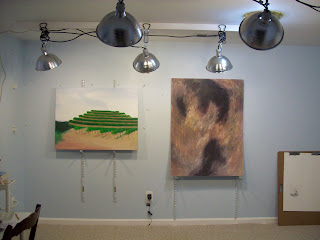 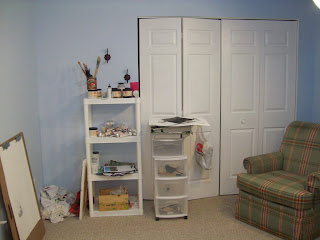 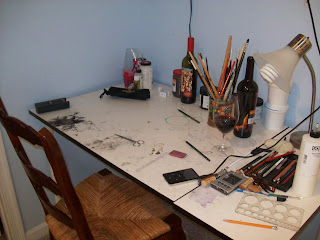 Really haven't had a lot of time to accomplish much. I've decide that I must force myself to draw a little each day. When I say that, some think I mean sketch/doodle/what-have-you. I do sketch when planning compositions but I think of drawing as a serious form in itself. So I'm really talking about creating finished, accomplished pieces. So far the results are mixed. I'm doing some good things but I'm having issues too. For one, I'm getting a little old. I can't see detail very well up close, with or without my glasses on, though it is better without. I was working on a still life last night and it was looking pretty good and I was starting to feel rather proud of myself. I propped it up on my makeshift easel- sitting back a few feet with my glasses on only to find some of the elements weren't lining up very well. I think I'm going to look into a pair of reading glasses from the drugstore since I know I'm not ready for bifocals yet. I just need to remember to step back every once in a while.
Posted by Stephen Boocks at 2:15 PM 1 comment: